Linguistics and Philosophy of Language

The Science of Languages After the Tower of Babel

Introduction to Linguistics and the Philosophy of Language 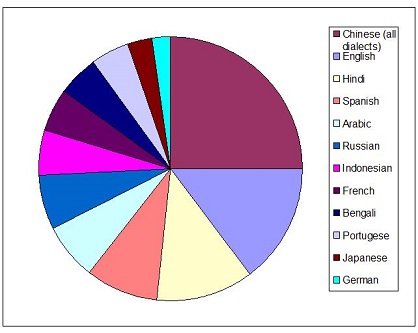 Chart of Languages By Total Number of Speakers

Among the many questions asked in linguistics and philosophy of language are:

What is the origin of language? How are all the languages of the world related as families and how are they similar and different? How do humans acquire language capability neurologically? Is thought predicated on language, i.e. do we think in language and without language could thought proceed? Are there limits of language after which one enters into silent contemplation, and if so how do we map those limits? What are common macro structures of languages? What are the functions of language? How does language relate to psychology? Do men and women think in different kinds of language, i.e. is language gender determined? Does geography affect the nature of the language of people in those climates? What is the relationship between ethnicity and language identity? How does language give a social identity and contextual identity? What common stylistic features are common to all languages? What is the typolgy of languages? What are the statistical structures of languages around the globe? How is grammar different and similar amongst different languages? What is semantics? How are dictionaries and lexicons made? What are patterns and trends in personal names and place names in history? What is the nature of free-flowing conversation and dialogue from a scientific perspective? What factors govern our choice of which languages to learn? Are there common speech acts in all languages? How do we understand the auditory-vocal channel for communication? How do we scientifically understand the production, transmission and reception of speech? What is the anatomy, neurology, and physiology of speech? How do the vocal tract and vocal organs affect langauge and the nature of articulation for humans? What are the acoustics of speech? What are the techniques used in the analysis of speech?