Outline & Bibliography on Jewish Music by David B Levy

Introduction to the Jewish Arts 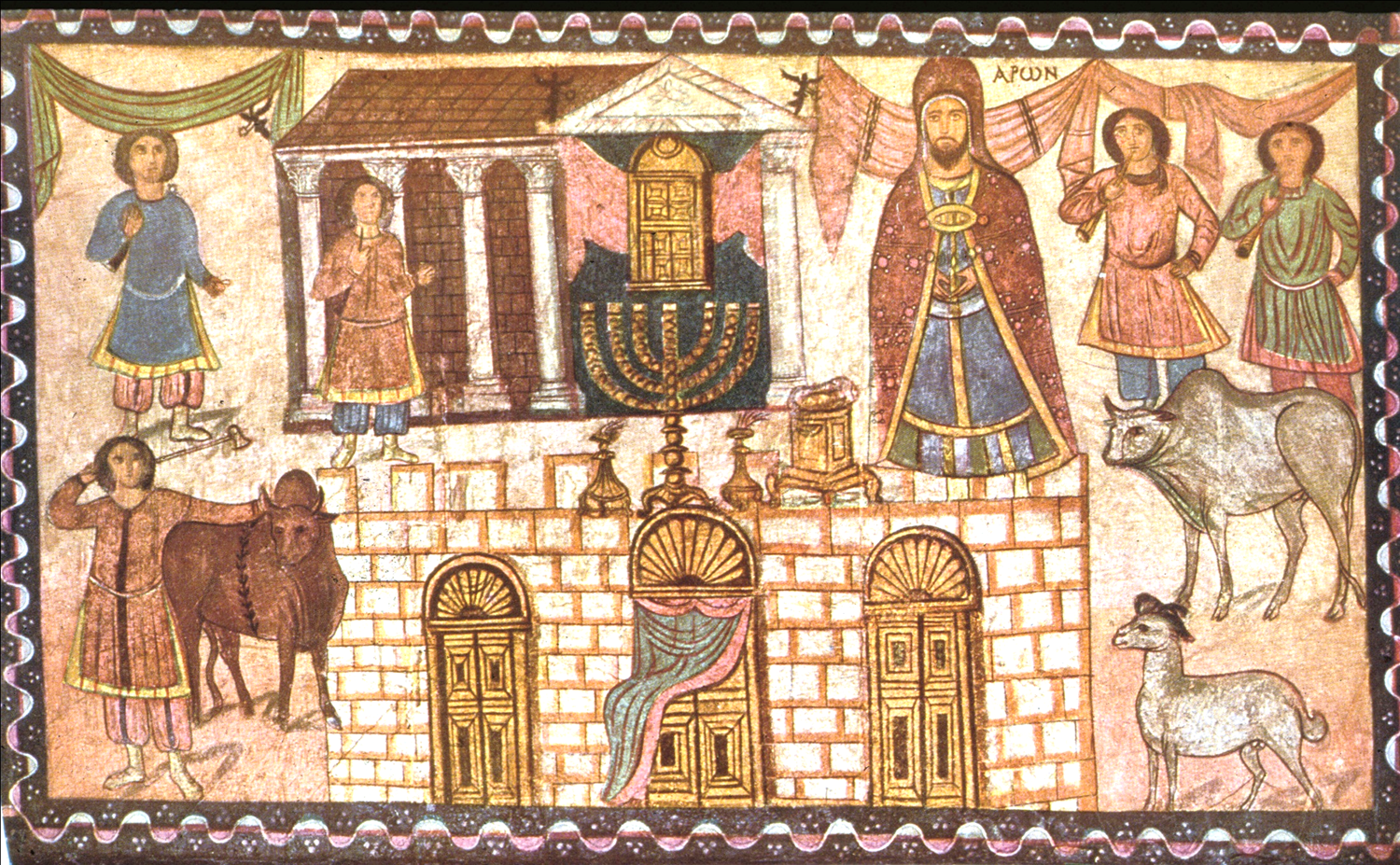 The commandment, "lo oseh likhah pesel" (do not make a sculptured image and bow down to it) influenced the Jewish artistic traditions. So too the admonition "bring the beauty of Yafet into the tents of Shem" was realized in the explosion of Jewish artistic representations during the Hellenistic period as illustrated by the synagogue mosaics in Dura Europas and Beit Alpha. Yet as late as the "Birds Head Haggada" the artist of this illuminated Hagadah only represented the great Tannaitic sages mentioned in the Haggada (i.e. Rabbis Tarfon, Akiva, Elazar, Judah, etc.) with 2 dimensional beaks because of the commandment, "you cannot see my face and live." Thus the faces of the rabbis of the Haggadah are not reprsented except with 2 dimensional birds heads. Indeed, Yakov could not believe that his life was preserved when the patriarch wrestled with a a malakh (Angel) at Peniel, the name of the place itself means "the face of Hashem." Rashi notes that the lechem panim (show bread) was backed with 2 dimensional faces while ibn Ezra puns on the word "lifnei" that it was "perpetually before the face of Hashem" when it was moved from a marble table to a gold table (see Yoma). Yet the anti iconographic traditions in Judaism, from the time of Avraham who according to the Midrash is said to have broken the idols of his father's bussiness in Ur of Chaldea, to the present day are tempered with the realization in Judaism of "Hidur at ha-mitzvah" or beautifying the mitzvah. The Mekilta of Rabbi Ishmael on the pusek "this is my G-d , the G-d of my father's and I will glorify Him" notes that Jewish ceremonial art has an important place in Judaism for decordating Torah mantles, crowns, wimples, havadal boxes, the menorah, etc. Indeed the epitome of Jewish hope is the rebuilding of the Beit HaMikdrash, and it was Bezalel who is described as possessing practical wisdom who decordated, adorned, and celebrated the radiance of Hashem through artistic work on the Temple and its instruments. The cherubim were winged creatures representing shalom bayit above the ark, and a highly artistic motif as was the laver, made from the womens' dedicated mirrors, that had a base of lions, oxen, and eagles, a patter we also see leading up to Shlomo's throne which also had lion, oxen, and eagles, which esoterically are understood as the representations of the 2nd, 3rd, and 4rth wheels of Hashem's merkavah (see Zohar VaEtkhanan).

While the fine arts are in essence corporeal, music as an art is purely of the spirit and the most spiritual of all the arts. The work, "Ta'amei HaTa'amim" (The reason for the trope), authored by the Masorite Asher ben Asher who lived in Tiberia sometime in the 7th century likens the art of cantillation to giving "soul" to the letters of the text. In this work when the baal korei chants the text correctly according to musical trope this act of music "opens the gates in Shamayim." While the letters of the text are the body of the torah, the music is the soul according to the Masorite Asher ben Asher. Music in antiquity was employed by many prophets in order to prophecize and go into ecstatic trances as noted by Dr. Moshe Idel and King David is said to have cured the meloncholy Saul by playing the harp. Dr. Joachin Braun has noted the differences in size of musical period instruments in antiquity such as the harp during the 1st temple (kinur), 2nd temple (lyre), and Roman and Byzantine periods (psaltrium) whereby the size, pitch, and harmony of the instrument was changed by differences in the representations of the instrument in these different time periods. For instance the magrepha is a strictly 2nd Temple instrument which is mentioned in the mishnah said to be shaped like a shovel and some sort of percussion instrument.

Music is magical and represents the spirit of a people. According to the rabbis of the Talmud "one had never seen a beautiful sacred building if they had not gazed upon the Beit HaMikdash, and one never heard "sublime music" if they never heard the Levites singing on the steps, the sweet singers of the Temple litrugies. Indeed Josephus tells us that the Beit Hamikdash was made of marble that was painted Mediteranean sea blue, and when the sun rebounded off of the gold dome, the blue painted marble had the appearance of shimmering Mediterrean pure sea waters. Thus Rabbi Akiva in Maseket Hagigah says, "al tamru mayim mayim" because the shimmering appearance of the illusory play of light on the blue marble is not indeed water, but marble painted blue in the sunight. So too the music of the Beit HaMikdash was even more holy and we learn many insights about this music from the Talmudim. One remark notes that when the Levites were taken in slavery to Babylon one Levitical family that excelled in instrumental music cut off their thumbs so that they not be able to teach music to their captors. "On the rivers of Babylon there we sat and wept, when we remembered Zion"  for the Levites refused to sing a new song of an old land in a land of captivity in deference to the music of the Beit HaMikdash, and indeed in the rishonim period Rabbinic halakhah proscribed the use of music instruments even at weddings in order to remember the true and final place for sacred music to be sung by the Levites in the Temple as expressions of kedushah and spiritual elevation. Thus the book of Lamentations (Eikah) is chanted in a minor key representative of dirges in musicology to express the deep emotion of and feeling of ultimate loss caused by the Hurban. Psalms during the 1st and 2nd Temple periods were set to music. We know this by many musical instructions innate to the language of Psalms such as "selah" which indicates an ascending scale on a stringed instrument. Sol Finesinger has written an excellent article titled, "Musical Instruments in the Tanakh" in which the scholar notes the differences in language for musical instruments mentioned in the Tanakh as theiy appear in their latter translations in the Targumim (Aramaic), Septuagint (Greek), Vulgate (Latin), Tafsir (arabic), Ladina (Judeo-Spanish), Le texte sacre (French), Die Heilige Schriften und Ihren Verdeutschung (German) etc.

All periodsof Jewish history gave rise to expressions of different cultures of Jewish music from Ladino songs, Sephardic pisgomim, to Yiddish folk songs. These music traditions are rich in beauty and deep in expressing the whole gamut of the emotions from sadness to ultimate joy and happiness. Music is the food of love indeed because it is the opposite of anything corporeal but wholly and holly an expression of the eternal spirit of human beings striving to reach the stars and G-dliness. Maimonides wrote a teshuvah on "listening to music" that was recently republished in this century by Dr. ISrael Efros, past president of the Baltimore Hebrew University, and from this teshuvah we learn that the Rambam distinguished between good and bad music. Bad music is lude, vulgar, and a thing of common people who live at the level of animals deriving no pleasure except from eating and things of the body while on the other hand good music serves a number of functions including, lifting one's spirits from meloncholy i.e. a thereapeutic function, and ultimately giving expresion to  the ultimate longing and desire of the human being "for dwelling closer to Hashem."

A Hasidic rebbe is said to have been so influenced by music's power that the Rebbe at seudah shelishit, when various Hebrew songs are sung, actually practiced a mystical technique of allowing his soul in musical ecstasy to "go out and not return" (yotzei ve bili teshuv) and the Rebbe song a niggun on particular shabbos seudah shelishit with all devotion to hashem in ahavas Hashem, ahavas Torah, and ahavas olam, that the Rebbe's soul did indeed go out and depart to the higher realms. We learn from esoteric Jewish texts that the Jewish souls (neshamah, ruah, chayah, and nefesh) are defined by musical ratios represented on stringed instruments, and indeed the transmigration of the soul (gilgulim) is sent on its journey to a song. Rabbi Yehudah HaLevy poetically and philosophically wrote in a poem that one turn one's life into a song, and it is through music that all transcendance is possible. While as Kohelet notes there is a time to sing and time not to sing, the piyutim (liturgical poems) that adorn and pepper the Rosh Hashanah and Yom Kippur Mahzor, representent the varous angels of varous hierachical ranks, in fact intoing celestial sublime song, which is not just fitting praise of Hashem who is leilah leilah (beyond all praise) but because of Hashem, who created the spirit of the soul, which can only find its ultimate expression in song.

Introduction by David B Levy

German Jewish Musicians And Displacement by the Holocaust by DBL

Herod's Artistic use of "painted blue marble" in the 2nd Temple: Josephus' peshat to deeper meanings

Hebrew Source packet: Music and Musical Instruments in the Tanakh