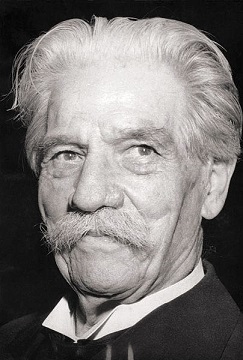 Hippocrates once remarked, "where there is love of human beings there is also love of the art of medicine." Nietzsche, in the work, Die Geburd Der Tragedie, sketched out a vision of a holistic man of science in what he called Apollonian medicine, of a music-practicing Socrates. The physicians's prayer ascribed to Maimonides urges physicians to be sensitive, caring, with  a service ethic, to enable the quality and longevity of life and eliminate pain and suffering. Unfortunately, the Nazis twisted Nietzsche's thought and gave birth to the opposite of the Apollean music practiciing physician i.e. a Dionysian medicine of Nazi doctors who had not care, humanity, nor compassion in their "cyclopic" drive to reduce human beings to lab rats and guinea pigs for cruel and barbaric medical experiments. Perhaps, as Holderin remarks, "where the danger is, there is the saving power too."

In the 19th century, William Osler of Johns Hopkins University had a vision of medicine's social dimension to better and further the well being of communities and secure the health parameters for each person to live a life in pursuit of liberty and happiness. Osler's favorite book, which he collected all editions of, was Religio Medici, or the Religion of Medicine, for Osler understood medicine was a calling, just as religions speak of callings, that required selflessness on the part of physicians to attempt to fulfill the mantel of such a field with the potential to do so much good.

Today, Oliver Sacks brings particular sensitivity and care towards his discipline of neurology and care of his patients. His book One Leg to Stand On, which documents Sacks' own being a patient so that he better learned how to put himself in the shoes of others, allows Sacks to combine brilliant literary talent with a medical humanistic vision of genuine respect for all human beings and dedication to the scientific advancement to wipe out disease and illness within the methods of the medical profession. Not since William Carlos Williams, a poet and physician, has a medical practitioner been able to harnass literary technique to be ministerial to a Medical Humanistic vision. In Sacks' work Awakenings, we see the social dimension of medicine as the main character physician invents a drug that allows patients in a catatonic state to emerge from their mental hiberation to awake and live life more fully, but when the government withdraws funding for the production of the medication, the patients tragically return to their catatonic slumbers.

The example of Albert Schweitzer is a case in point of a physician with a vision of the Medical Humanistic ethical altruistic and selfless devotion to the well being of others. Schweitzer gave up a prosperous career as a physician and/or a concert organist (he wrote a 2 volume set on the music of Bach) and instead opted to relocate to the then third world of Africa and offer medical help to underserved populations. Schweitzer dug the foundation for his own hospital with his own hands, donated his own blood,  gave up his own coat to clothe the cold, selflessly devoted himself to wipe out the plague of malaria there. This represents a tincture of  his boundless efforts to secure medical supplies and treatments for his patients. Albert Schweitzer was saint-like by putting himself at risk, and represents a physician who gave up everything in the realm of material comfort, (being an illustrious graduate of Harvard University that would allow any door to provide to him for securing his own wants), but rather chose  to make a difference in the world of medical praxis with underserved populations in Africa. Schweitzer's calling was a radical ethic.

Literature gives us many ways in which to mirror the experience of illness as found in the short stories such as Thomas Mann's Death in Venice and Magic Mountain, Tolstoy's The Death of Ivan Ilych, ,or Dr. Conan Doyle's Round the Red Lamp. Authors like Treves, Francis Brett Young, A. J. Cronin, and Somerset Maugham have made use of their medical knowledge in fiction, and non-medical writers have done the same. Who can forget the masterly picture of locomotor ataxia in Kipling's story "Love of Women," or the harrowing account of cancer in Arnold Bennett's Riceyman Steps? Charlotte Perkins Gilman's short story, "The Yellow Wallpaper' lets us see the dangers of medical mis treatment in the area of psychology as representative of the confining and misogynistic ramifciations of Victorian "rest therapy" for women suffering from post-partum depression. As Michel Foucault has brilliantly demonstrated in works such as The Birth of the Clinic, power-knowledge regimes sometimes can harm innocent persons just as in the novel One Flew Over the Cuckoo's Nest. A novel of the philosopher and Nazi resistance fighter Albert Camus recounts the portrait of a selfless physician, who is the most ehtical and moral individual in all of the protagonists of Camus' multivarigated literary works.

Medicine gives the chance to help give the gift of life, and that is so awesome and powerful that one may hope that the best and brightest go into this field with the potential to extend quality and longevity of life and wipe out pain, with a commitment and calling to others . Such is the hope of the Medical Humanities, to make us better human beings, and more empathetic, compassionate, and ethical practioners of the art of medicine and science.

Intro by David B Levy

Please also see the LibGuides on Jews in Medicine, Jewish Ethics, and Science and Torah for other resources of interest.